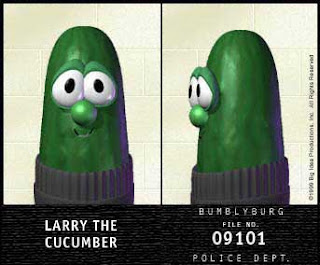 We at BDJ Labs are huge fans of veggies--the closer to home that they're grown, the better. Nothing against the fine people of Guatemala and Honduras and other Central/South American countries; we just think that the fewer miles a beet or carrot has traveled to get from the dirt to your face, the better it tastes. We've had a great deal of success in our own gardens with some veggies (zucchini and tomatoes), no luck with others ("Um, are these onions? I can't tell without a magnifying glass"), and middling results with others. Cucumbers fall in this middle ground--we've grown them, but while we aim for giant green zepplins, we get stubby little pickles. That's fine--if our little stubs don't satisfy, there's Chicago's Green City Market (runs until Oct. 31), plenty of bodegas, and even Strack & Van Till's fine produce section. We cut up one of the arms-length cucumbers we bought recently and decided to wrap one up with delicious bacon.

By the way, the above pic is Larry the Cucumber, from the excellent VeggieTales series. Never mind that the stars of these 'toons are armless talking Christian vegetables--they're way more charming and funny than disturbing. We at BDJ Labs highly recommend watching the VT flick The Pirates Who Don't Do Anything, maybe while munching on a BLT.

The results
Hey, guess what? Cucumbers don't cook up very well. They're great in salads (We'll share a recipe for our favorite cucumber dish below), awesome on sandwiches, and fantabulous by themselves...but baked in bacon? Not so much. We were very glad we cooked some nekkid bacon up next to the cucumber samples--gave us something to cleanse our bewildered palates with.

The conclusion: Bacon + cucumber = eh--you could do better

The recipe: Thai cucumber salad
This is a lot like the cucumbers that your friendly neighborhood Thai place puts out as an appetizer or side to other dishes. Insanely easy, and it goes great with anything--especially bacon.
2T sugar
3/4 C white or rice vinegar
Several dashes chili oil
2 large cucumbers, thinly sliced (peel them or don't--we don't care)
1 medium-size onion, thinly sliced and separated
Salt

Put the first three ingredients in a bowl; mix until sugar is dissolved. Arrange the cukes and onions in a big bowl; shake salt all over and let 'em rest while you go do something fun for a few minutes, like look at pictures of LOLdogs at www.ihasahotdog.com or do a sudoku. Return, then dump the dressing concoction over the veggies. Let rest for an hour, then refrigerate until you're ready to serve.
Posted by Spinner at 11:57 AM No comments:

We at BDJ Labs are pleased and proud to announce that, after a tragic fire that consumed our entire lab, and all the bacon therein (possibly the best-smelling building blaze ever), we've rebuilt and are back--and, we feel fairly confident in saying--better than EVER. We'll have the same great taste tests, edutaining bacon facts, hilarious videos, sumptuous recipes...just more of everything you love about BDJ.

The next wave of our assault on the world's taste buds begins today. Stay tuned, baconeers...
Posted by Spinner at 7:03 AM No comments:

BDJ NOTE: This has nothing to do with bacon whatsoever. It's just insanely, undeniably cute.

Short on luck: Meet Koda the miniature horse... who was also born a dwarf 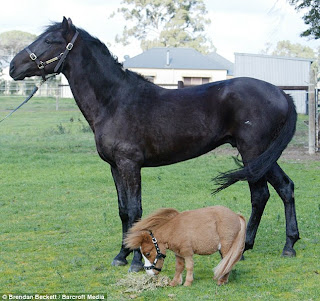 He is so tiny, visitors often assume he's a stuffed toy.

Standing at 59cm tall, if Koda the horse wants an equal he has to turn to the vetinary cat for company.

The 'American miniature' horse - who suffers the double-whammy of being born a dwarf - has had a bout of health problems caused by his size, but he is now recovering and enjoying the life of a pampered pet.

The cheeky 'American miniature' horse was always meant to be small but at birth vets soon realised he was dinky even for his breed.

'He was no bigger than a cat,' said his vet Andy Lynch. 'He was diagnosed as a dwarf soon after birth.'

Koda's condition is rare and Lynch is amazed that he's still alive and kicking at 13-months-old despite a torrent of health problems.

Brave Koda has had lots of surgery to correct his stumpy, buckled legs but that hasn't helped his peculiar face. His lower jaw juts out and he has bulging eyes, upturned nostrils and a wrinkled nose.

'He had a punky look, a fuzzy forelock and his mane stuck up like a mohawk,' Dr Lynch said.

Koda's poor health prognosis left Dr Lynch with little doubt he should be put down.
But veterinary nurse Karen Stephenson, 23, was astounded by the resilience and spirit of the pint-sized pony.

'I'd never seen a miniature horse and I just thought him amazing,' she said.

'I fell in love with him as soon as I saw him and thought he deserved a go at some good quality life, so I took him on.'

The next step is extensive dentistry to remove protruding adult teeth that won't fit in his little mouth.

He has recovered well from every operation so far.

'He's everyone's friend but he's also got a very naughty streak and he'll chew just about anything,' he added.
Posted by Spinner at 9:54 PM 1 comment:

A product we can believe in

Yes, the video is covering the Yelp box. No, we can't fix it. Yes, we'd rather look at the painfully handsome Jon Hamm anyway. 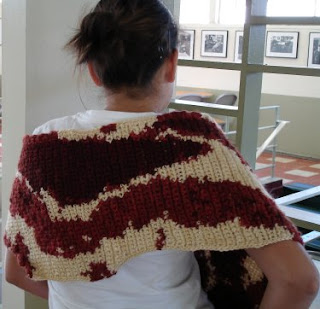 The folks at Bacon Du Jour would like to apologize for the sporadic posting up in here. Seems we're all insanely busy with our high-paying regular jobs (unfortunately, bacon testing isn't as lucrative as you'd think, so we have to earn our living in other areas), and haven't been able to gather for testing. Rest assured, we will be heading into the kitchen again soon--this weekend, in fact--so hold onto your bacon bits for some phenomenal BDJ goodness.

This bacon wrap, by the way, is a lovely crocheted item we found over at Monster Crochet. You can click that there link, or the gorgeous photo, to get a closer look at the masterpiece.
Posted by Spinner at 6:04 PM No comments: 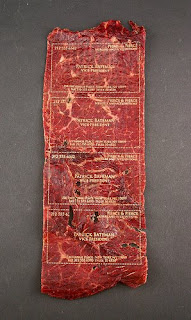 Time to order business cards? You might want to hold of placing that order with Vista Print. While those freebies might be tempting, they don't offer the panache and excitement of MeatCards. Rather than printing on yawn-inducing paper, these lovelies print on...well, let's let the fine people at MeatCards explain the phenomenon to you:

"We start with 100% beef jerky, and SEAR your contact information into it with a 150 WATT CO2 LASER.

Unlike other business cards, MEAT CARDS will retain value after the econopocalypse. Hoard and barter your calorie-rich, life-sustaining cards.

MEAT CARDS do not fit in a Rolodex, because their deliciousness CANNOT BE CONTAINED in a Rolodex."

We at BDJ Labs will be placing our orders shortly, as soon as we stop salivating from the pics.

Makin' bacon: Stepping up our game 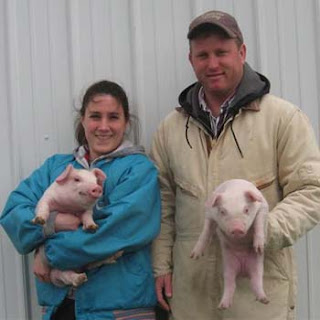 The couple in this picture are Amy and Tom Ifft, and they are magicians. They take humble little pink blobs like the adorable ones they're holding in this picture and--through conscientious feeding practices and loving care at their farm, Twin Oak--transform them into magnificently delicious meat.

What's the difference between the styrofoam-backed meats lined up in orderly rows at Da Jewels, and the less-polished, more-pricey cuts offered by family farmers like the Iffts? In a word: HUGE. That extra effort and expense leads to a vast difference in the meat's flavor, texture, and healthfulness--so much so, that if you procure their goods from Twin Oak Meats or corner butchers like Paulina Meat Market, you might never visit the mass-market meat mounds again.

For obvious reasons, BDJ Labs is turning to Twin Oak Meats as the pork-belly source for our next bacon-making effort. This week, we're placing an order and hopefully, good Lord willin', we'll pick up a pretty portion of pork from their booth at Chicago's Green City Market Saturday morning. We can hardly wait.
Posted by Spinner at 11:01 AM 1 comment: