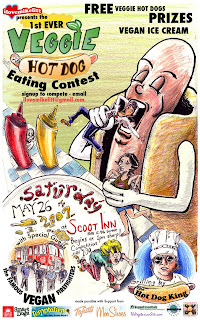 We at BDJ love meat, but we don't eat it exclusively. We nosh on veggies on a very regular basis, and we've even been known to consume meat substitutes. We're big fans of the Boca 'chicken' nuggets, we dig those meatless sausage patties (especially the maple-flavored ones), and we count the all-veg Chicago Diner among our favorite Windy City eateries. Veggie dogs, however, we just can't get behind. It's probably because they just can't match the satisfying texture and meatastic flavor of your average all-beef kosher dogs. We figure they could only be improved by the addition of bacon, so we wrapped a Smart Dogs wiener in bacon and hoped for the best.

The results
Hope died upon our first bite. The foamlike texture of the 'not dog' endured, so we felt like we were biting into a bacon-wrapped hunk of couch stuffing or something similarly non-edible. We swallowed one bite, then tossed the sample into the BDJ Labs waste receptacle.

The conclusion: Bacon and veggie hot dog = Bad dog! Bad!
Posted by Spinner at 10:24 AM