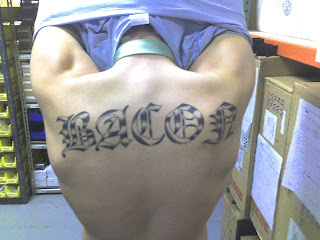 After a well-deserved break--during which plenty, but not quite enough, bacon was consumed--Bacon Du Jour will be returning on Monday, February 28, 2011, A.D. We apologize for the absence, but rather than make up some lame excuses, here are some cool ones (also made up):


"We went on vacation to a nude beach, after which we couldn't sit down in front of our computer for a very long time, because of the extremely painful sunburn on our buttocks."
"We got totally stoned on Bob Marley's birthday and, thanks to a severe case of the munchies, ate our power cord. In our defense, those things look WAY too much like black Twizzlers."
"We came down with the rockin' pneumonia, AND the boogie-woogie flu."
"After seeing a guy put ketchup on his hot dog at the mall food court, we were too traumatized to leave the house for several months." **
"We went to Gene's Sausage Shop to restock our Nueske's supply, when a pack of angry vegans followed us to our car, then beat us with bricks of extra-firm tofu."

Enough excuses--we'll see you next week.