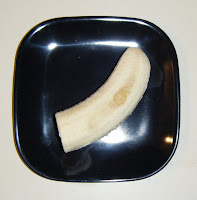 The subject
Who doesn't love bananas? Idiots, that's who. Rich as they are in potassium, bananas are even richer in utter deliciousness. They're flat-out fantastic on top of cereal, in ice cream, as an article of clothing (thank you, Josephine Baker), and just by themselves. Studies show they're high on the list of All-Time Perfect Foods.

Still, the banana could be made better...by BACON!

We took a semi-ripe (yellow skin, with a few wee brown spots) banana, cut it in half, wrapped the cleft 'nana in one strip of bacon and slipped it into the oven (the other half of was sacrificed to Otto and Willie, BDJ lab assistants). In short time, the laboratory was filled with the intoxicating aroma of cooking salty meat, enhanced by the sweet scent of baked banana. Our team members were anxious to sample the results of Test #101, but, in the immortal words of Thomas Petty, the waiting proved to be the hardest part. 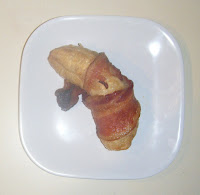 Finally, the bacon-ensconced banana emerged from the oven. The banana had expanded, while the bacon shrank, so the test subject gave the appearance of a salty-meat python just starting to strangle its fruity prey.

Enough on the appearance--on to the taste. Which was, in a word, delicious. The bacon was crispy in spots, chewy in others, and the carmelized sweetness of the banana proved a fitting complement to the savory bacon. Soon the sample had disappeared from the tasting plate, leaving nothing but grease for our lab assistants to clean up afterward.