Bacon Bit #B01: Bacon vs Bacon 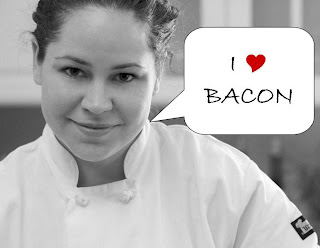 Talk about sacrificing yourself--Top Chef winner and Chicago native Stephanie Izard reviewed a total of 15 kinds of bacon on her blog. The varieties ranged from precooked to turkey bacon to premium thick-sliced stuff. My personal favorite, Farmland, fared well, whereas others didn't pass muster. The BDJ standby--Oscar Mayer, "America's Favorite Bacon" as it reads on the label--did pretty well.

Personally, I applaud Ms. Izard for her willingness to sacrifice her arteries for the benefit of her bacon-loving fans. I adore bacon but don't think I'm hardy enough to endure eating more than a dozen varieties of the stuff in one day.

What's in the future for Ms. Izard, besides a triple bypass? Well, her much-anticipated eatery, the Drunken Goat, should be opening later this year. Surely she'll have at least a few bacon-laden selections on the menu--we can only hope.