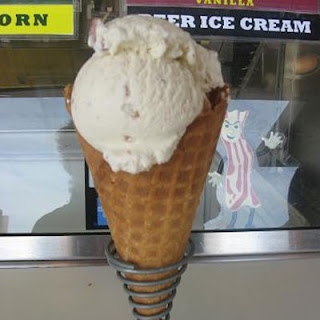 We at BDJ are sick of bacon getting a bad rap. Top Chef winner Richard Blais declared via his Twitter status on Oct 14 that bacon is "overrated." Flippant news commentators refer to H1N1 as "bacon pox." We won't even go into how a certain parent of one BDJ lab staffer uses her Facebook page to deliver motherly grief over the bacon love. No respect.

And then there's food writers like this Kiri Tennenbaum of Delish.com. In her piece, she lists a bunch of bacon-laden products and terms them "bizarre." Slapping such a label on the tantalizing bacony items indicates that for a food writer, she's can't be much of a food adventurer. If she was, she wouldn't think the addition of bacon to ice cream, hot dogs, and other edibles is a mind-blowing concept. Sigh. Don't tell her about Bacon Salt's lip balm, or her head might explode.

The good news: This piece gives exposure to great products like Archie McPhee's bacon gumballs, the Mo's Bacon Bar at Vosges, Das Food's maple-bacon lollipop, and the fabulous-looking bacon ice cream pictured in the article, and above (note McPhee's Mr. Bacon lurking in the background).

We're still steamed about bacon's bad rap. It's not weird, it's not a passing trend, it's a way of LIFE, God dammit. Wake up and smell the salted pork, people!
Posted by Spinner at 10:08 AM