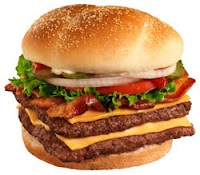 After the minor disappointment that was the Third Pound Angus Bacon Burger from a certain fast-food establishment (no names, but it rhymes with Schmick Schmonald's), we decided to try the new Bacon Deluxe from Wendy's. In a word: it's awesome. While we fully acknowledge no sandwich could ever have enough bacon on it to satisfy our appetite for salty pork strips, we do have to admit that this sandwich does better than most in delivering the bacon boom.

Also, we applaud Wendy's for doing better than any other national fast-food chain in furthering the cause of worldwide bacon domination; however, it can't stop at just a couple of sandwiches. We at BDJ Labs humbly submit the following suggestions to help Wendy's in its quest to baconate the universe:
We were going to tell you about Wendy's Twitter contest to find the nation's biggest bacon lover, but since we want to keep the prize money and not share, we're not telling after all, and instead we cordially invite you to go F yourselves.

Have a bacony day,