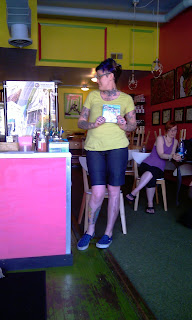 The Sweets and Snacks Expo launches tomorrow. We at BDJ LOVE our candy and snacky morsels almost as much as we worship bacon (almost) and starting tomorrow morning, most of Chicago's behemoth McCormick Place expo center will be wall-to-wall, floor-to-ceiling, asses-to-elbows with noshes, both sugary and savory. Not much bacon--but there is if you look. We'll come back with plenty (trying not to eat it all, and probably failing). When we return, we'll wrap a bunch of it in bacon, hopefully making up for the fact that we've been slackasses about updating lately, about which we feel horrible.

This picture has nothing to do with candy, except maybe candy is delicious, just like Bleeding Heart Bakery's treats are delicious, and this here is Michelle the grand poobah of BHB, and she's sweet/zingy like a Sour Patch kid, or something. Anyway, she has a new book that you should run out and buy so you can make yourself some awesome cupcakes at home. They won't be as good as hers, but then again, not everyone that picks up a baseball bat is Babe Flippin' Ruth, either. Who You Callin' Cupcake? available at fine booksellers everywhere, and maybe a few less-fine ones. Just buy it, okay? Gawd.
Posted by Spinner at 3:30 PM