From the Chicago Tribune:

Around 1,500 pounds of meat stolen in central Iowa 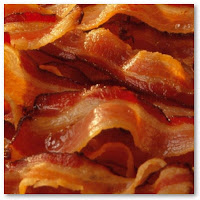 MELBOURNE, Iowa — Around three-quarters of a ton of steak and other meat was stolen from a Melbourne meat company.
Barry Sedlacek (sed-LAH'-chek) owns Sedlacek's Wholesale Meat Co. He told the Marshalltown Times-Republican that the thief or thieves got in last weekend and took the meat, a scale and some cash.

The Marshall County Sheriff's Office estimates the loss at $1,900, but that didn't include the meat cost. Sedlacek says that adds several thousand more dollars to the total.

He says whoever took the beef and bacon has to sell it somewhere, so he's hoping for help from someone on the community who is offered a meat bargain.
Posted by Spinner at 9:02 AM