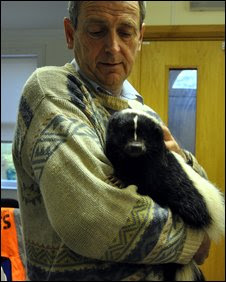 We at BDJ Labs are all for a daily dose of bacon--but for humans, not other, four-legged critters. Also, no living being should live on only bacon. It's delicious, but it's not exactly chock full of the vitamins, minerals, and other nutrients we need to live healthy lives. We figure stretching the bacon out over a span of time extends your life and actually lets you consume more bacon in the long run. Hogging it all at once leads to heart disease, diabetes, and extreme fatassedness, and it could bring your bacon-consumption days to a premature end.

We therefore applaud this story of a bacon-stuffed pet skunk, who apparently subsisted on nothing but bacon sandwiches. The poor little bugger was well on his way to an early skunk death when animal control staff rescued him and changed his diet right quick. Yay!, because 1) he'll live to stink up another day, and 2) more bacon for the rest of us.

Fat skunk gives up bacon butties
An overweight skunk from Somerset whose main diet was bacon sandwiches has been re-homed and put on a strict diet.

The owners of Mr Bumble the skunk handed him over to the RSPCA when they realised they could not look after him properly. The creature is now being cared for at the Tropiquaria animal park at Washford Cross, near Watchet. Park owner Chris Noisier said Mr Bumble weighed one stone (6.8kg) and needed to lose 5-6lb (2.2-2.7kg).

'Vegetarian option'
Mr Noisier said: "We're now working on dieting him down to what he should be and clearly bacon butties are not a normal part of a skunk's diet in the wild.

"We're putting him on the vegetarian option at the moment. It's very much like a human weight watching issue. He is getting to meet lots of new people so there's lots going on in his life and I suspect it's making up for the lack of his old favourite food."

In the wild, skunks' natural diet would include carrion, insects, mice and a variety of greenery.
Chris Noisier said Mr Bumble was currently being fed on a vegetable high-fibre, low-energy diet consisting of greens and melon.

Scent glands
He is also taken for two 30-minute walks each day on a lead.

Skunks are native to North America, but have become popular as house pets in the UK. A number of skunks have been abandoned recently since a new law banned the removal of their scent glands. Two vets have examined Mr Bumble and neither can be sure whether he has been de-scented.
Posted by Spinner at 8:19 AM