Aside of Bacon: The Lost Art of Liner Notes

Yeah, we know--records have nothing to do with bacon. However, we picked up a record at a resale shop, and the liner notes are too delicious (there's your connection, if you need one) NOT to share.

Long before MP3 downloads set the recording industry on its ear, there were these big, flat, Frisbee-looking things called "records"--also known as "LPs" or "albums." Still used by DJs and musicphile hipster doofuses, they're now an endangered species. While listening to your iPod just calls for pushing buttons, playing a record is a physical, almost ritualistic experience. Slowly slip the delicate disc from its cardboard shell, touching only the edges (fingerprints and scratches are instant death to a record), and gingerly lower it onto the turntable before carefully resting the needle onto the album. Head BDJ Labs Tech Jenni S. collects albums, but while others select theirs by the quality of the music or affection for the artist, she chooses her albums for the uniqueness of the covers. Her living room wall is decorated with a scary array of candy-colored covers, singers with bad hair, and curious drawings of beer cans. 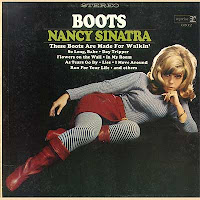 Lost with the decline of records is the art of liner notes. Each album cover had about a square foot of space to entice eyeballs with the cover (one of the most enticing being Herb Alpert's Whipped Cream and Other Delights, featuring a woman wearing nothing but dessert topping), and lure them in with text on the back cover. These little nuggets of literature were important enough to the recording industry that they used to give out Grammys for them. Stan Cornyn earned the title "King of the Liner Notes" for writing scores of these testaments, making even the dreckiest of dreck sound like aural gold. In the case of Nancy Sinatra's 1966 album Boots, the author took the whole "seduction" perhaps a little too literally:

She's been there already. Barely in her twenties, she looks younger. That look, like Lolita Humbert, like Daisy Clover. The power to exalt, or to destroy, wanting only the former, but unafraid to invoke the latter if the time comes.

The eyes that see through, know more, look longer.

Unafraid to pull on the boots again, toss off a burnt out thing with a casual 'So long, babe,' and get.

A young fragile living thing, on its own in a woundrous world. On her own. Earning her daily crepes and Cokes by singing the facts of love. Her voice tells as much as her songs. No faked up grandure, her voice is like it is, a litte tired, little put down, a lot loving.

No one is born sophisticated. It's a place you have to crawl to, crawling out of hayseed country, over miles of unsanded pavement, past Trouble, past corners and forks with no auto club signs to point you, till you get there and you wake up wiser.

She's arrived. She sings you about the long crawl. And makes you have to listen.

Pretty heavy stuff for a record that consists mostly of covers, capped off by a novelty song. Still, the liner notes give you something to look at while you wait for the music to start in that little gap between the time you drop the needle on the spinning record and the notes hit your ears.
Posted by Spinner at 7:31 AM