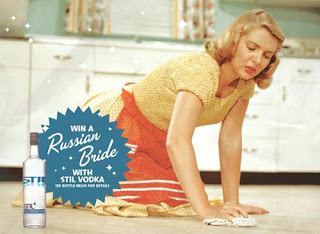 Vodka is a magical libation--but dang, it's expensive (except for the low-brow brands like Wolfschmidt, which some well-meaning soul brought to our BDJ Labs Halloween party and left here, but it's about eight miles past nasty, unfortunately). Which is why, when we saw a box labeled "vodka beans" at Gene's Sausage Shop in Chicago's Lincoln Square, we were thrilled. We envisioned extracting the seeds from said beans, planting them in the patch of earth behind the complex, then harvesting 1.75-L bottles of the stuff toward the end of the summer.

Sadly, the "beans" are somewhat of a fraud--they're actually little boomerang-shaped chocolates with vodka filling. No vodka bushes in the backlot for us. Still pretty awesome, though--each little boozy bonbon is 26 proof, so if you were to eat a box all by yourself, you'd be feeling no pain. We decided to wrap one in bacon and see if we couldn't improve on the beans.

The results
Meh. The whole, in this case, is not greater than the sum of the parts. The bacon cooked up crisp-chewy, but the bacon and hootch kind of escaped, even though we wrapped the beans up in swaddling bacon clothes, kind of like tiny 8 lb, 6 oz baby Jesus. So, we were left with bacon that was merely kissed with chocolate, and a hint of vodka-y goodness. It would have been better had we cooked the bacon, then maybe topped a slice with a bean. Better yet, keep the two separate and enjoy their wonders apart.