Baconfest: A day in bacon-smeared pictures

Head Lab Tech Jenni S. was fortunate enough to attend yesterday's astoundingly successful Baconfest Chicago event. After sleeping off her bacon hangover, she's finally made it to her laptop. Here's her recap of the day, in words and photos (which look blurry thanks to her getting the lens all smeared with bacon grease--dumbass).

Words can hardly describe how much fun yesterday's Baconfest went. The joint was full from floor to ceiling with the smell of bacon, and crowded with bacon-loving folk high on the aroma. I could write an entire novel about everything I loved--from the Pabst and Bakon Vodka at the bar, to the gorgeous Stan Mansion that housed the whole thing. However, I'm just going to share a few thoughts and a couple blurry pics--try not to drool on your laptop as you read--on my favoritest parts.

The vendors
Bacon-friendly stores and eateries from across this great land of ours toted their wares to the event to treat attendees to some samples, and to provide baconeers the chance to leave the event with more than bacon in their bellies. Our favorites included: 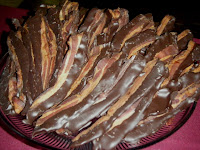 Bleeding Heart Bakery: Chicago's best and bacon-friendliest purveyor of baked goods was one of Baconfest Chicago's most generous sponsors. I had the pleasure of hanging out with owner Michelle, and her leading sugarslingers Erica and Dan, for a bit during the day, and sampled a ton (well, not literally, but close) of their goods. My favorite: the chocolate-covered bacon. Better than others because they use Nueske's, and because they dip it halfway, rather than cover, in chocolate for a more balanced bite. 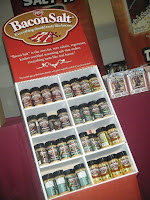 Bacon Salt: My love for Justin and Dave's extensive line of bacon-flavored goods is no secret. At Baconfest Chicago, I not only got to taste some of their newest products (including Bacon Pop microwave popcorn and the Bacon Ranch dip), I also got to meet and hang out with the insanely cool Dave (Justin had to stay back at the Bacon Salt HQ to hold down the fort). Hope we get to cross  paths again, and not just because he might give me more Baconnaise (yum). 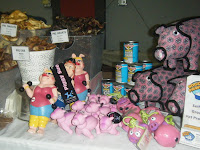 Soggy Paws: Why would a dog wash set up shop at a bacon event? Because the staff at this Uptown establishment love bacon almost as they love pampering pooches and, as such, they carry a huge range of bacony items for pet lovers to treat their canines with. They have pig ears and pig hooves (both of which Otto and Willie would love to sink their teeth in right now), but they also have adorable/awesome piggy toys. Our personal favorite: the super-tough portly rubber pig that smells exactly like bacon. They also carry superhealthy foods that contain pork--they look so good that you might be tempt to open a can and dig in. Nueske's: I'm not the only person that thinks this Wisconsin company is the indisputable king of all baconmakers--an astonishing number of chefs in the Baconfest cookoff relied on the brand for their culinary masterpieces. Nueske's team members Megan and Thomas loaded up the baconmobile and made the trek all the way from Wittenburg to share the company's prizewinning pork with event attendees. Confession: I visited the sample table about five times. I definitely need to make my annual pilgrimage to their shop north of the Cheddar Curtain more often, so I can replenish my staff of their applewood-smoked stuff.

Das Foods: Katie Das' Man Bait maple-bacon lollipops are legendary. They were a hit at the National Confectioners Association show. While I managed to snag an entire bag of delicious candies from the lovely and gracious owner, I didn't manage to snag a decent picture. Whoops. 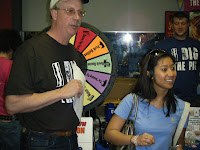 I'm a sucker for trivia, so I was to thrilled to see the Illinois Pork Producers (another one of Baconfest Chicago's awesome sponsors) with their Wheel! Of! PORK! The group didn't much need to push its pork-positive message to the attendees--hello? we live and breathe pork, so we're totally down--but it was a blast spinning the wheel, learning about the hardworking men and women of the Other White Meat industry, and taking home I Dig Pig t-shirts and other goods. In addition, the group spread the word of its efforts to combat hunger in the state--especially important in this nasty economy.

The eats
The spread was eye-opening--I'm a lover of bacon and I've gotten pretty creative with the stuff, but my mind was completely blown by the staggering array of fanciful dishes. There was not a single loser in the bunch--any and all of the bites I enjoyed and would order off their menus in a second--so it's painfully difficult to pick favorites, but there were a few standouts: 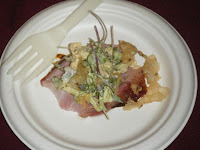 The Signature Room: Chef Patrick Sheerin served up a pastrami-style hunk of pork belly, topped with kimchee coleslaw and crispy rye. The sizeable hunk of bacon on the plate (tasting portion? it was practically a meal in itself) was just about the most beautiful thing I've ever seen--thick, crispy on the edges and soft enough inside it practically melted. I couldn't help myself from going back not just for seconds, but for thirds. 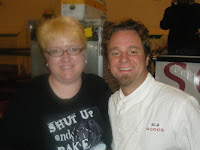 Socca: I've passed by this Lakeview restaurant dozens, if not hundreds, of times. The next time I'm in that neighborhood, I will not be going past, but walking right in and sitting down. Chef Roger Herring (best culinary name ever, right?) served up triple-bacon veal meatballs and asparagus with a lemon-thyme bacon sugo. I wish I could cook meatballs this flavorful and perfectly seasoned, but I'll just leave it to pros like Roger--who in addition to being insanely talented, could not be a nicer guy. 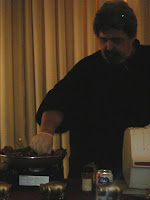 Gary Wiviott: Many people claim to be BBQ experts (suck it, Flay), but this man actually knows his shit. He's the author of Low & Slow, one of the bestest tomes on the subject of thrilling with your grilling, and he presented on the subject at Baconfest. He wasn't cooking up enough of the demo food to share with everyone, but I was in the right place at the right time and got to sample one of his famous "dragon turds"--a jalapeno stuffed with spicy sausage and wrapped in bacon. I will be duplicating that magical dish soon, believe me. 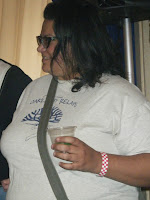 Amateur Hour: Not all the chefs at Baconfest Chicago were pros--although the five contestants in the amateur bacon cookoff (sponsored by Nueske's) are skilled in their own right. Tina Bennett took home top honors with her Bacon Strip Cookies, a wondrous shortbread concoction loaded with bacony goodness--and again, while there wasn't enough for the hundreds of attendees, I was hanging with the Bleeding Heart crew when she came through with her award and some extra tidbits.

Organizers Seth, Andre and Michael should be super proud of themselves for putting together such a letter-perfect event. And you should do everything in your power to get to Baconfest Chicago 2011. See you there, baconeers.
Posted by Spinner at 9:43 PM