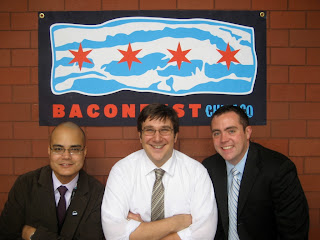 If the citizens of Chicago sometime tomorrow realize that the air of their fair city suddenly smells like pork and applewood smoke, these three guys are the reason why.

Bacon worshipers Andre Vonbaconvitch (left), Seth Zurer (middle) and Michael Griggs are the fellas bringing BaconFest Chicago to reality. After months of hard work assembling chefs, vendors, and sponsors--and after decades of cultivating a love for salted pork strips--their efforts will pay off tomorrow when the doors on the festival open at the historic Stan Mansion in Chicago's Lincoln Square neighborhood.

"It's been a long time coming, with a lot of ups and downs," says Zurer. "We're tickled that the day is finally here."

So are we. Even the most die-hard bacon fanatics might end up with bacon hangovers after the event. There'll be bacon tastings from some of the most distinguished bacon-minded chefs in the country. Bacon artisans like Nueske's will be hawking their wares. Bacony edibles/drinkables like Bakon Vodka's infamous libation and Das Foods' Man-Bait maple-bacon candies will be on hand. Many are looking forward to the amateur bacon cookoff, with dishes from bacon-scallop gyoza to a BLT dog vying for the prize. There's so much stuff that not even the organizers can say what they're most looking forward to.

"I'm excited for the moment right before we open the doors," says Zurer. "I'll poke my head out and see what i can only assume will be a seething horde of excited-beyond-belief bacon lovers getting ready for their encounters with bacon greatness: checking their hair, smoothing their eyebrows, shpritzing some Binaca....

"Then I'm excited to see those same people at the end of the shift, shuffling out, goodie bags full of bacon booty, waddling a little from all the bacon they ate, smelling as if they'd been cured and smoked themselves, smiling deliriously in that pre-nap bacon euphoria."

Seriously, we at Bacon Du Jour could not be more excited. If you weren't lucky enough to get tickets, it's all right--cook up a plateful of Nueske's finest on Sunday morning and log onto BDJ for a BaconFest Chicago wrapup.
Posted by Spinner at 11:37 AM