On loss and love of BACON

NOTE: Today's post is written by BDJ Labs' head technician, Jenni S. The views expressed herein are her own and not necessarily shared by the rest of the BDJ Labs staff, its management or owners. Okay, they totally ARE, but we had to say that stuff. Lawyers. Anyway... 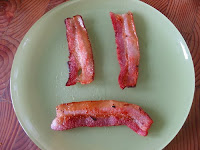 I'm a loser. At least, I am according to the results of Wendy's hunt to find the country's biggest bacon fan. The Twitter-based contest consisted of 12 days of gunning for points by tweeting with the #bacon hashtag, writing bacon haiku, taking pics of bacon, making bacon crafts, blogging about bacon, answering bacon questions, creating bacon videos, yada yada yada. Despite the fact that I love bacon more than anyone else I've ever met, I came in fourth. I guess I should be happy, considering I didn't learn about the contest until it'd already begun, and I didn't figure out the trick to racking up the points until almost the very end. Yet, when the bacony smoke cleared and I found myself without a single prize, I was devastated. Ah, well--what would any sporting contest be without bad calls and/or heartbreaking losses?

Friday night, when the curtain went down on the Wendy's contest and I learned I'd lost, I was as heartbroken as a 8-year-old girl finding out Santa had forgotten to leave a Barbie Dream House underneath the Christmas tree and, instead, discovered boxes of Carter's undershirts. I'd worked my bacon-loving BUTT off the last day of the contest to secure the $200 daily prize. I made a bacon mobile:


...I made a rocking, blingy bacon bracelet:

Isn't it pretty? By the way, in case you were wondering about what happened to the strip entwined around my wrist, and whether or not it got tossed, you needn't be concerned. I didn't waste the bacon--this sucker, raw in the picture, went right from around my wrist to a preheated oven, where it was baked to crispy perfection. Yum, lunch. In fact, not a single strip of delicious, savory bacon was wasted in the entire course of the contest--not by ME, anyway.

...with the help of Seth at BaconFest Chicago, I tracked down bacon-lover Kelly, who graciously sent me pics of her Japanese-character tattoo of the word "bacon" with my Twitter ID stuck next to it: 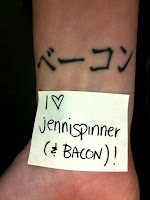 I tweeted about bacon all day long--exceeding the maximum of three times an hour. I came up with countless things that bacon would say #ifbaconcouldtalk. I posted a heartwarming bacon story to the Wendy's site (with photographic evidence submitted to the contest's cruise director, UrBaconMeCrazy). I did every single thing I was supposed to do, and as of 5pm, by my calculations I was so far ahead of the pack that I could have STOPPED tweeting about #bacon and #ifbaconcouldtalk at that point and still came out on top. Yet, when I checked the leader board at the end of the evening, there I was, behind several others. I was heartbroken.

Two days later, however, my pain has abated greatly. In fact, it's been replaced by the realization that I don't give a pork butt about points and tweets and leader boards. No offense, IsCoolerThanYou or SimplyDab--you might have racked up the gift cards and prizes, but I came away from the contest with something better: the rock-hard conviction that I AM THE GREATEST BACON LOVER EVER. It's not that I eat more bacon than anyone--I have no idea or desire to quantify the amount--or that I talk about bacon more than anyone. It's that my passion for all things bacon runs so deep that I cannot imagine it running any deeper, in anyone else, anywhere. Bacon is in my SOUL. So there.

I'm very thankful to the wonderful people at Wendy's for putting their bacon love out there so strongly, and for having the cajones to put together such a powerful, creative social media experiment. I hope this is only the beginning of the company's push to achieve total bacon global domination. I'll back that 100%.
Posted by Spinner at 9:28 AM