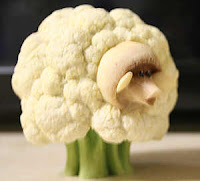 Cauliflower is among the prettiest vegetables. It's also one of the more--how can we put this delicately?--gas-inducing. Seriously, if a person were to eat a whole head of cauliflower at once, about 45 minutes afterward, he could be considered a biological weapon. Happily, the flavor and texture more than make up for the embarrassing side effects (in the opinion of most BDJ Labs staffers, anyway). Eat it with friends, and you're all in the same, potentially poot-filled boat. Just be sure to keep a window open, and stay away from open flames. And if you're having a cauliflower party, you might feel inclined to wrap a bit in bacon--which is just what we did.

The results
Pretty darned good--the cauliflower gave up hardly any of its slightly earthy taste, but took on plenty of bacony flavor throughout. The only downside: in order to crisp-cook the bacon, the whole shebang had to stay in the oven a bit longer than the cauliflower could take, so rather than the crunchy texture that lightly steamed cauli takes on, the veggie was pretty darned wilted. Also, as cooked cauliflower usually does, the nugget coming out of the oven smelled. Kind of like a fart wrapped in bacon. It tasted much better, thank goodness.

The conclusion: Bacon + cauliflower = smells like a winner
Posted by Spinner at 1:04 PM