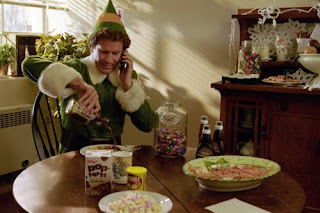 In Elf, Will Ferrell artfully portrays Buddy, a human who believes he's one of Santa's lil' helpers. He has some strange eating habits. As he states, elves stick to the four major food groups: candy, candy canes, candy corn, and syrup. However, in once scene, he opts for another snack: cotton balls. Despite admonishments from his "papa," he pops one right after the other. When BDJ Lab staffers watched the scene at a recent post-holiday gathering, we figured: Heck, if they're good enough for Buddy, they're probably good enough for bacon. Right?

The results
Oh, dear God in heaven and all that He oversees on Earth, we couldn't have been wronger. We have never--we repeat: never--until this test spit out a sample without even swallowing a bite. Never, that is, until now. We were hoping for bacon-infused cotton candy, but what we got was nearly too horrible to describe--stringy, lumpy, flavorless (the cotton didn't absorb a single drop of precious bacony fluids) and just plain yuck. We should have known, you said? Perhaps...but at least we had the balls to try.