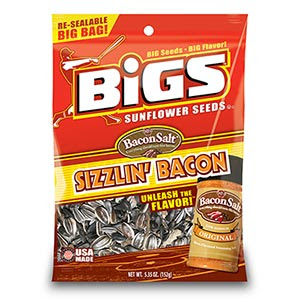 One of our absolute things from the 2009 All Candy Expo (which had a big bunch of savory snacks, along with the sweets) were Bigs Sunflower Seeds--they come in crazy flavors like Frank's Red Hot (in our opinion, the best major-label hot sauce out there), Vlassic dill pickle, and the pinnacle of awesome tastes, Bacon Salt. We've never been the hugest fans of sunflower seeds, but when they taste like bacon, they're irresistible. We received a package of samples today from the company, and as a thank-you to the fine people at Bigs, we thought we'd give their fine product a big bacon salute.

The results
Awesome--the already bacontastic flavor of the sunflower seeds was amplified about 10 times by bacon wrapping. To return the favor, the shells added crunch to the crispy bacon. The texture might be a bit much for those that prefer to split and discard the shells before eating the seeds in the middle--we're the whole-nine-yards kind when it comes to sunflower seeds--but we think the texture was spot on.