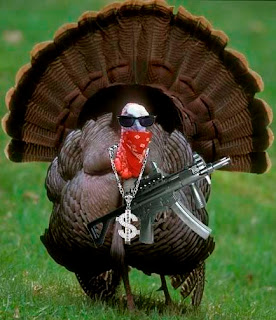 In the past, there's been no love or respect for turkey bacon among the staff members of BDJ Labs. No offense to the bird that gave its life for the strips, but we've always felt that it just wasn't a meat product worthy of the "bacon" moniker. However, recently our friends Elana and Helen brought a package of the stuff to our Super Bowl party. Because it didn't get eaten on Sunday, it languished in the fridge, until we decided to give it the bacon treatment. And, while we waited for the test subjects to come out of the oven, we decided to nosh on some naked, unwrapped turkey bacon. While we won't completely go back on our former diss of the TB, we will admit that it tastes decent--hammy, not bacony--and we'll give it points for aspiring to be something greater than plain bird meat.

The results
Yummy--the turkey bacon didn't crisp up (it doesn't when baked on its own, either), but instead soaked up bacony grease and plenty of flavor. When coupled with the crispy bacony bacon on the outside, it was like eating crunchy bacon with a soft bacon center. All in all, a savory, bacony success.

The conclusion: Bacon + turkey bacon=worth gobbling up
Posted by Spinner at 9:50 PM