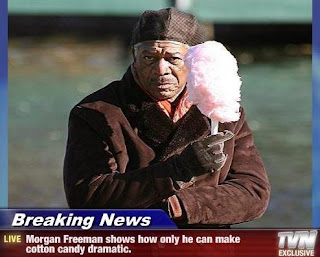 As much as we love Morgan Freeman, we love cotton candy more. You give the guy behind the counter a couple bucks; he takes it, and turns a couple scoops of sugar into a delicious assemblage of edible gossamer sweetness, which melts in your mouth nearly instantly. Empty calories never felt so fulfilling. Because we love it so much, and because it was on sale at Strack & Van Til, we decided to wrap our cotton candy in bacon, which is something you cannot do with America's most beloved actor. Well, you could try wrapping Morgan Freeman in bacon, but something tells me he wouldn't cotton to it. Ha! See what we did there?

The results
We figured it would melt more quickly in the bacon than it normally does in our maws, and it did. However, it left behind the bright-as-bejeezus food coloring used to make cotton candy blue and pink (we're pretty sure those chemicals would endure after a nuclear attack), and sweetened the bacon itself. Not a complete waste, but not tasty enough to repeat--if you're in the mood for candied bacon, we highly recommend you just sprinkle a little bit of brown sugar and cinnamon on the strips during the last 5 minutes or so of the bacon-baking process.

The conclusion: Bacon + cotton candy = fair to middlin'
Posted by Spinner at 10:14 AM