I Can't Believe It's Not Bacon: HICKORY INCENSE 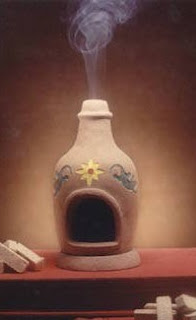 If there's a smell anywhere near as enthralling as the aroma of frying bacon, it is the scent of pork being cured through the magical power of smoke. If you agree, do yourself a favor and drive--or fly, hitchhike, whatever you need to do--to a little town in central Wisconsin called Wittenberg. Despite a pretty teeny population (about 1,100 if everyone's home that day), there's a decent number of attractions to hold your interest. There are charming murals adoring scores of town buildings. Diane's Restaurant serves up some of the best hot java to ever fill a mug.

And, of course, there's Nueske's.

Nueske's is the mecca of cured meats. Bacon's the star attraction, to be sure, but there's also sausages, smoked turkey, and ham tempting enough to bring a vegan to his knees. You could lose hours on end wandering through the shop, marveling at the stunning array of meats and gourmet foodstuffs--and oh, the smell. Just wandering through for a 30-minute stretch is enough to infuse your clothes and hair with the rich, earthy scent of applewood smoke. We think Heaven's atmosphere is air pumped directly from the inside of the shop, it's that tantalizing.

Unfortunately, you can't just go to the household products aisle at Target and pick up a Glade Plug-In that smells like bacon. Oh, but wouldn't it be marvelous if you could turn the key in your front door and open it to be greeted by the tantalizing odor of wood-smoked bacon? That's what we were hoping for when we procured the insanely adorable little incense burner pictured here (procured from Albuquerque-based Inciensio de Santa Fe), and a ton of little bricks of natural hickory wood. We've been in love with this company for about a decade now. Instead of the dirty-hippie smell of the chemical-laden cheapo stick incense favored by stoned college kids, these incenses smell like pinion, cedar, juniper, mesquite and--of course--hickory. We logged onto the site and ordered a bigass box of hickory cones. We figured that if we were lucky, flaming those bad boys up would create a reasonable bacon smokehouse facsimile. If not: oh, well--we'd still enjoy the fireplace-like smell of burning wood.

When we inhaled the first wisps of smoke, we exhaled disappointment. The smell was lovely, to be sure, but not very evocative of a bacon smokehouse. But then, when the incense nubs burned down and the smoke cleared, a marvelous thing happened. The campfire smell morphed into the aroma of lingering hickory smoke--just like a smokehouse! Oh, happy occasion--we've discovered a way to have the smell of bacon in our lives 24/7, even when we haven't touched the oven in days!

We've been so delighted by the bacony smell permeating the BDJ barracks that we're going to be needing another box o' hickory bricks. We're thinking of ordering more burners for other rooms (wouldn't this steam engine look fabulous in the lavatory?) so the smell of bacony smoke never leaves our happy nostrils.
Posted by Spinner at 6:00 AM