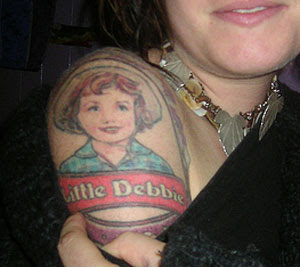 Take Little Debbie's super-addictive, crackalicious snack cakes. Here it is 2010, and you can still purchase an ENTIRE box (between six to 12 items, usually) of the Tiny Temptress of Taste Treats' morsels for less than two bucks. Great news if you're a budget-minded mom packing desserts into your offspring's lunch boxes, or a hippie who's spent all his food money for the week on a Phish ticket but still desperately requires a palliative for his raging munchies.

Happily, this low price point also is perfect for your loyal BDJ Lab Techs, because after purchasing a box of Diminutive Deborah's Swiss rolls for today's mad bacon experiment, we still had plenty of dough left over to procure--what else?--more bacon (priorities, people). We wrapped some of that precious bacon around some Swiss rolls and baked those fatty mofos right up. Here's how it went... 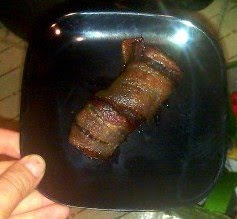 Not much to look at--the finished result closely resembles a bacon-ensconced Schnauzer turd--but man oh man, are looks in this case deceiving. While Swiss rolls were never our favorite LD delicacy (BDJ staffers are split between the fudge brownies and the nutty bars), we fell ass-over-teakettle in love with the bacon-wrapped roll. The dry cake and waxy coating morphed into a velvety chocogasm of sweet, gooey bacony heaven. Were the transmographied snack cakes not so insanely rich and weighty--and were we not relatively short on test bacon for the week--we might have wrapped up the entire box o' rolls and gone batshit bacon crazy. This is definitely a bacon trick worth pulling out for your next bacon-themed get-together.

The conclusion: Bacon + Little Debbie's Swiss roll = snackeriffic!
Posted by Spinner at 6:00 AM