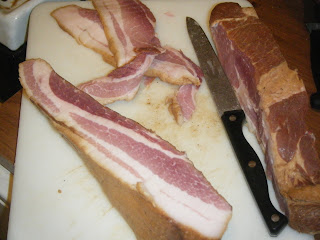 We at BDJ Labs have been enjoying the fruits of others' labor--Nueske's, Farmland, Whole Foods, Oscar Mayer, Hormel, etc.--since we were wee little baconeers. While all of those salted-pork brands are indubitably delicious, we'd heard from bacon buddies and read on the Interwebs that the taste of homemade bacon approaches pork nirvana. We're nothing if not crafty, so, after only the briefest of discussions, we decided to make the leap into DIY bacon.

Turns out, it's not that hard at all. You just need a few basics, some easier to find than others:
1. Pork belly. This is a cut of meat you can't buy at just any old megamart grocery store--you need to find yourself a butcher. We're lucky enough to live within easy striking distance of Paulina Meat Market, and butchers don't get any better than that (we feel the same way about their store that Carrie Bradshaw does about Jimmy Choo). Ask your butcher to cut the rind off, or just do it at home (it takes a sharp, sharp knife, so be careful). We got about 4 lbs.
2. Curing salt. It's not pink just to be cute--this salt (also known as Prague Powder No. 1) contains a wee bit of sodium nitrite to help keep meat fresh; the coloring is so that you can distinguish it from regular salt, because consuming too much of the pink variety at once can make you feel icky. We picked our pink salt up at Paulina, but the awesome Spice House sells it in their stores and online.
3. Hickory chips. Luckily, these are available at most stores that sell BBQ gear, so you won't have to wander all over creation to pick these up. If you like, you can use different woods (the fine people at Nueske's use applewood, for example), but don't just break up a 2x4 and throw it on the fire--buy stuff specifically packaged for grilling and smoking and doing other meaty things.
4. Patience. It's not like ripping open a package of strips and baking them--making your own bacon takes days. It'll pay off, don't worry.

Okay, now that you've got your special goodies ready, here's what you do:
1. Mix up 1/4 C regular salt with 1 tsp of the special stuff, then rub it all over the pork belly.
2. Stick the salted pork belly in a giant Ziploc bag, making sure to get as much of the air out as possible. Store in the fridge for a week, turning every day so it cures evenly.
3. Soak several cups of hickory chips for at least an hour, or overnight.
4. Remove the pork from the bag and rinse thoroughly.
5. Prep your charcoal grill; you'll only need a small amount of coals. When they've been glowing for a while, push them to one side of your grill and throw a handful of hickory chips on top. Put the grill rack on, then put a piece of tin foil big enough to put the pork on the opposite side of the grill, then smack that slab of pork on (the grill should be about 200 degrees--any hotter and the pork'll cook).
6. Put the lid on and smoke the pork for 2 to 4 hours, depending on how much smoke flavor you want. Check periodically and throw another handful of wood chips on whenever necessary.
7. Let the meat rest for one hour before refrigerating.

Pretty easy, right? Like Tom Petty said, the waiting (both the week the pork sits in the fridge, and the hours spent tending the smoker) is the hardest part. A very close second, though, is the cutting. When you decide to cut yourself a slice off, you'll find it's easier to do with a sharp knife (again, be careful), and you might want to put the slab in the freezer for an hour or so, to firm the meat up and make cutting easier. 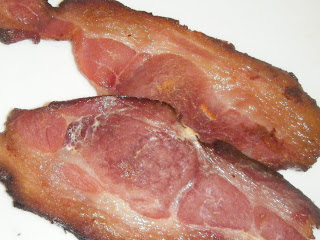 Now the cooking: we found that slices of the homegrown cooked up far better in the oven. In our castiron skillet, it got too dark too fast, and curled around the edges too much for our taste. Instead, turn your oven to 350, put the strips of bacon on a nonstick pan and bake for 10-15 minutes until they look pretty.
Posted by Spinner at 5:36 PM