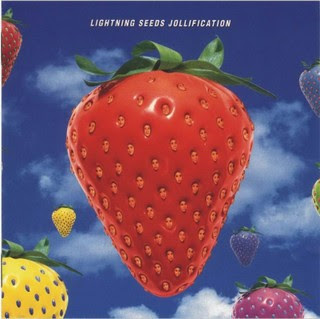 You gotta love this time of year. Strawberries actually taste fruitlike and cost less than a mortgage payment because they're so plentiful. If you walk in Chicago down the section of Lawrence between Broadway and Clark--the part of Uptown that BDJ Labs calls home--look closely at the triangular planters at the entrance to every side street. In addition to the lillies and heather that grace the containers, there's a blanket of strawberries poking through the mulch. We never get to eat them (homeless people, or maybe birds, get to them first), but no matter--fine grocery retailers are selling the berries at crazy low prices, so we decided to wrap a berry in bacon and see what happened.

FYI: The picture at left is the cover of a CD by the Lightning Seeds, a highly underrated Britpop band. Look 'em up.

The results
"What happened" is yuck. We knew strawberries were tricky to cook--too much heat and they turn into a flavorless red mush--but we thought maybe bacon-baking would be kind to the fruit and impart it with bacony goodness. No such luck--the bacon pan looked like a salted-pork crime scene. Actually, "crime" might not be the worst word, since the bacon/strawberry combo proved so nasty we tossed it in the garbage--and wasting bacon, friends, truly is an offense. If you have a wealth of berries, whether it be through a prolific strawberry patch or overpurchasing, we recommend you either eat them plain, in a yogurt/granola parfait, or in a strawberry-rhubarb pie. Ooh, baby.

The conclusion: Bacon + strawberry = the opposite of delightful

Next up: The results of BDJ's first attempt at homemade bacon! Oh, let us do a dance of mirth and glee together!