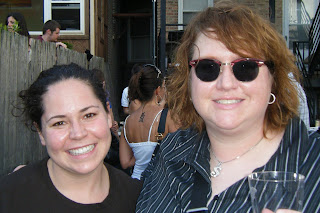 God bless Twitter--I've scored more free stuff in the past couple of weeks from that site/service/whatever the F you want to call it than you could shake a stick at. Bacon soap from Archie McPhee, Lyle Lovett tickets from Ravinia, and--thanks to a Twitter-based contest--tickets to a swingin' backyard culinary bash. The host: Top Chef champ and Chicago native Stephanie Izard. The purpose: Izard's gearing up for the opening of her Drunken Goat restaurant a few months down the road. The crowd: veteran food journos like Steve Dolinsky (aka ABC-7's "Hungry Hound" guy), restaurant marketing whiz Ellen Malloy of the Restaurant Intelligence Agency, and scores of hungry food fans like me.

Holy crap, the food was great. I'm a horrible blogger, because I was more concerned with stuffing my face and imbibing mass quantities of Three Floyds' excellent Gumballhead wheat ale, than I was about marking down details regarding the food I was wolfing down. Here's what I ate, to the best of my now-cloudy memory:
* This grilled octopus dish, with pineapple and some other stuff sprinkled on it (pancetta, I think): awesome
* Little triangles of polenta, with wee slivers of radish, creamy sauce stuff, and tangy berries on the side: fabulous
* Cute little biscuit rounds with smoked BBQ pork and slaw on top: brilliant
* Oysters with some other stuff on the half shell: yum
* Calamari stuffed with lamb: OH MY GOD--I think i had three servings of this one
* Hunks of fried bread with some meat or other on top: never got to it because I was so apeshit about the calamari

Inside, Wandering Goaters were treated to a trio of divine gelatos: banana curry, lemon ginger and roasted red pepper. I marveled at all three, but the banana curry had me going back for seconds, despite the fact that my fullness level was already at the pants-bursting point.

Ms. Izard didn't just walk around schmoozing--she spent most of the evening working shoulder to shoulder with her prep staff in cooking and plating the dishes. However, she did take a break to grab a beer and tell me she's already hard at work on the menu for next month's menu. While she's tight-lipped about the specific dishes, she did share the star ingredient that will dominate the dishes: BACON. Come hell or high water, I will be there--and next time, I'll take better notes.
Posted by Spinner at 7:47 AM