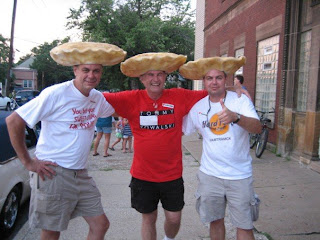 The intrepid baconeers at BDJ Labs set out to Whiting, Ind., for the annual Pierogi Fest. If you've never been, mark your calendars for 2010--it's a modest affair but packed with fun and food, centering on (what else?) the marvelous Polish invention called the pierogi--a hearty dough filled wtih potato, cheese, mushroom, meat, sauerkraut, and tons of other fillings. In our hometown of Chicago, pierogi are accompanied by a number of condiments--sour cream, applesauce, onions and (our favorite) little bits of crispy bacon. We entered the Pierogi Fest fairgrounds in hopeful search of bacon bits.

We were disappointed. Many booths offered sour cream alongside their little Polish ravioli. A precious few put out applesauce as well. However, not a single booth sprinkled their wares with bacon bits. We would have cried, were it not for the delightfully named "bacon buns" at one booth. The doughy balls filled with crumbled bacon, brushed with butter and baked to golden brown were delicious, and they helped at least partially satisfy our never-ending hunger for bacon.

Still, after one bacon bun, we found we needed more meat. We had "chevops" (aka cevapcici, or myrad other spellings), a wondrous Serbian sausage that has every animal in the world stuffed into it. They look modest, like shriveled little Brown 'n Serves, but they taste like meat paradise.

We'll definitely be back next year. We might, however, bring our own side of bacon.
Posted by Spinner at 7:08 PM