When it comes to snack crackers, Wheat Thins are about as yawnworthy as you get. They're made of wheat, and they're not very thick--tada! While they're pretty darned tasty, they're about as thrilling as watching paint dry, grass grow, etc.

Now, though, Nabisco's attempted to add excitement and glamor by offering different flavors--the "Artisan Cheese" varieties, for example, which includes Wisconsin Colby and Vermont Cheddar. We picked up a box from the Wheat Thins "Fiber Selects" line, choosing the Garden Vegetable flavor. It's a good thing they're not incredibly delicious; considering the remarkably high amount of fiber contained therein, going to town on a box could render you a dangerous weapon. We figured bacon, however, could bring up the 'wow' flavor factor on these lackluster snacks. Let's see if we were right... 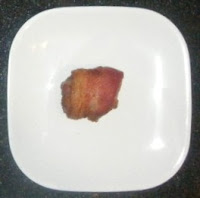 The end result of this test was a disappearing act worthy of Doug Henning (note to anyone under the age of 30: look him up--the magician was funny looking but could kick David Copperfield's ass any day of the week). We bit into the sample and could taste and feel only bacon. A sidelong glance at the sample's cross-section proved that there was, indeed, a cracker amid the layers of bacon, but the flavor was totally absent. If we strained super hard, we could detect the grainy texture of the cracker, but no crunch or wheaty flavor. Weird. I guess we're glad it didn't make the bacon taste bad, but we're bewildered why the Wheat Thin decided to bail out on the flavor marriage with bacon. Cold feet?