We love Little Debbie snack cakes--the oatmeal creme pies being among our favorites--but there's no way in H-E-double-toothpicks that we would ever attempt eating an entire box in one minute. This is one of those things that occurs to straight males as a brilliant idea, but as an incredible demonstration of dumbassedness to the rest of the world. Funny, though.

Anyway, for this test, we took half an OCP and wrapped it in two slices of bacon. 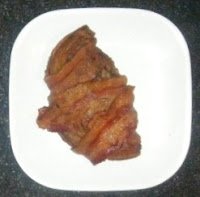 Another example of a test that, while in the realm of edibility (edibileness? whatever), is still something that tastes better without bacon than with. While the sugar/fat-laden creme didn't leak out between the bacon gaps and burn into a nasty mess, it did seep into the oatmeal cookie part, turning it into a mush that was a tad bit too sweet for our tastes, and not bacony enough. Oh, well--still leaves us with a whole bunch of OCPs for dessert. Yay!