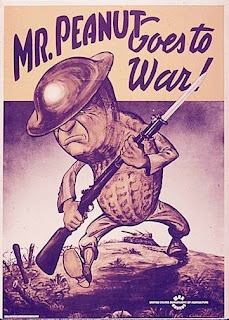 Many Asian foods bear literal-sounding--if not very poetic--names. Head BDJ Lab Tech Jenni's favorite dim sum joint Happy Chef, in Chicago's Chinatown Square, is a good example. The menu is written in Chinese, and the English part might as well be; names like "savory meat triangles" are apt, but they don't tell the entire story. Savory meat triangles are, indeed, fairly triangular, and they certainly contain meat. The whole story: a sweet dough surrounds a meaty filling, and deep-frying causes the triangle to puff up, making it look like an overinflated triangle (which is why she refers to them as "tasty footballs").

Peanut sweet rice balls are similar. Yep, there's peanuts involved, as are rice and a sweet flavor, but the name doesn't impart the fact that the peanut filling is actually more on the savory side, and that the sweet outside is made of rice flour, which is stickier than a toddler with a Sno-Cone. We decided the sweet-savory combo might make a good candidate for wrapping in bacon...so that's just what we did.

The result
Fair to middlin'. While we had high hopes for the peanut filling, its hearty, almost meaty flavor actually fought with, rather than complemented, the bacon. We give a thumbs up for the sticky rice ball itself--the flavor went well with the bacon, and the super-sticky texture contrasted with the crispy-crunchy bacon in a fun way. We might consider repeating this experiment, but definitely not with this filling.