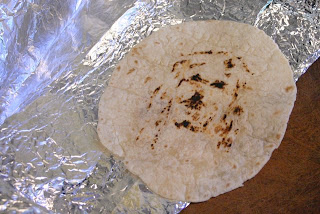 The tortilla is pretty damned versatile. It's the foundation of tons of different Mexican treats, but now we gringos/gringas have co-opted it for the lo-carb sandwich known as a "wrap," which is just a burrito with the ingredients of a turkey club in it. According to the Tortilla Industry Association (yep, that's a real group--go here if you don't believe me), the tortilla was created by a peasant for his hungry king in ancient times 10,000 years before Christ (whose face you can miraculously see in the tortilla at left). They estimate that Americans consume about 85 billion tortillas a year--that's a lot of fajitas.

For our test, we used a flour, rather than a corn tortilla. 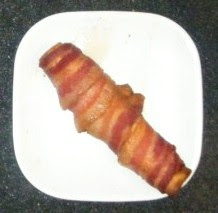 Yummy--the tortilla soaked up just enough bacon grease to flavor it and make the texture interesting (i.e. kinda smooth, but not too mushy). And while we enjoyed the sample, we found this to be one of the tests where we taste and wonder of the bacon-bakin' subject's potential of elevation through addition of other foods. The tortilla-bacon combo, for example, would be even more tasty if we'd slapped some cheese on the tortilla before rolling and wrapping it. Or, if we scrambled a couple eggs, then wrapped 'em up in the tortilla with some cheese before wrapping with bacon--sort of a super breakfast burrito. Mmm, we're getting hungry--this is what happens when we perform the test in the evening, but write the results before breakkie.

Next up: Bacon + Rice Krispy Treat
Posted by Spinner at 7:08 AM