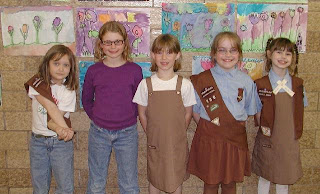 A brownie is many things: In Scottish folklore, a brownie is a helpful being that comes out at night to clean and do other helpful chores. The term also describes a girl who's too young to be a full-fledged Girl Scout, but still has a strange urge to do good deeds and dress in an adorkable costume. Our personal favorite, though, is the super-moist chocolate cake square, which first appeared about 100 years ago. We especially like the edible brownies that Pillsbury offers up--all the dry ingredients in a box, so you don't have to do all that pesky measuring work. We whipped up a pan in BDJ Labs, frosted it, and then cut a square for testing.
The results
We're sorry for the lack of "after" photo--we didn't realize we'd accidentally deleted it from the BDJ Labs camera until after we'd eaten the entire pan of brownies. Ah, well. We can tell you that the result was a-friggin-mazing--the brownie fluffed up and attained a level of cake moistness that had before that point never been seen in the entire universe. Each bite was like being visited by a chocolate angel with wings of bacon. The mark of a good test: the lab falls completely silent, except for nomming sounds, from the first test bite until the test plate is totally empty (and, sometimes, licked clean--we're not proud). Our only regret, and it's a small one--next time, we'd scrape off and reserve the frosting, bacon-bake the brownie, then put the frosting back on top at the end.
Beat that, Betty Crocker.
The conclusion: Bacon + brownie = chocoluscious
Saturday: Bacon + Wheat Thin
Sunday: This week's Bacon Bit
Posted by Spinner at 7:18 AM