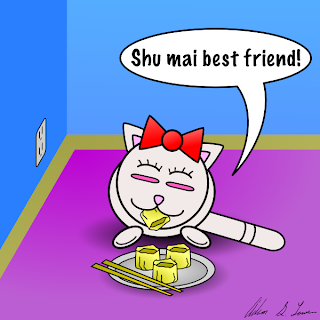 Shu mai (or shaomai, or siomai--there's a billion ways to spell it in English) are a delicious Chinese treat commonly found on dim sum menus. Fillings vary, but traditional shu mai contain a mixture of pork, shrimp, and mushroom ensconced in a wonton, then steamed and served with a soy-saucy dip. You might have tried frozen varieties from Trader Joe's or another neighborhood grocery store and been disappointed (like we were). While nothing beats the fresh, piping-hot shu mai served up at Chinese restaurants, the Doll brand frozen seafood shu mai (made in Hong Kong) we picked up from the Asian market down the street proved to be a close second. Awesome, yes--but would the awesomeness be boosted by bacon?

The result
Awesomeness elevated. We would have repeated the bacon test, had our lab staff not consumed the entire tray of seafood shu mai while waiting for the bacon-baked niblets to come out of the oven. We're not a patient lot at BDJ, sad to say. We'd definitely recommend serving these at a bacon-themed dinner, either as an appetizer or as part of the main event--and we highly recommend repeating our sauce recipe, which consisted of soy sauce mixed with a healthy dose of sririracha chili sauce. Yowza.

Next up: Bacon and shrimp cracker
Posted by Spinner at 8:18 AM