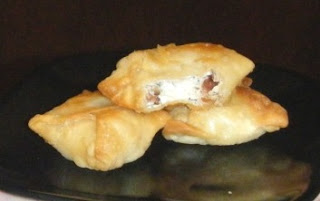 Crab rangoon are one of our favoritest appetizers. If done right, the cheese-filled won ton treats are fluffy and creamy and crispy and eminently yumworthy. If not--well, they're still edible (especially when slathered with enough sweet-and-sour sauce). If cooked properly and filled with bacon, however, they could rank among the world's best foods of all time.

This twist on the Asian-menu staple swaps bacon for the crab (which is usually imitation crab, anyway), and it's ridiculously easy to make. Have you figured out that BDJ Labs is staffed by baconmongers who'd prefer to spend more time eating than working? That's why this recipe appeals to us.

Directions:
Mix the cream cheese and bacon in a small bowl; drop a small glob (about a teaspoon) of the mixture in the middle of a wrapper, then fold the corners over so they meet in the middle and overlap (seal them by rubbing water on the edges before folding, then pressing tight). Heat the oil in a large pan; drop the rangoon in a few at a time and fry until the skin is golden brown and bubbled. Drain; serve with sweet-and-sour sauce, or a mixture of half BBQ sauce and half honey. Eat.