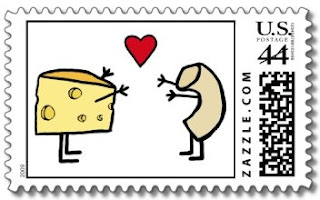 Whether you prefer the homemade variety, easy-cheesy Velveeta kind, or the nuclear-orange boxed kind, odds are you're a mac 'n cheese fan (if you'd like to show your love via USPS, click the photo at left to order that stamp). We at BDJ Labs enjoy the occasional bowl, usually boosting the flavor and/or nutritional value by adding veggies, tuna or (of course) crumbled bacon.

With the economy being in the crapper, this meal option is looking more popular than ever (if you feed your family on naught but mac 'n cheese, you can end up with a grocery bill that's less than $20/person/week). It's also become a bar-menu staple, in the form of breaded/fried triangles of the stuff. Inspired by that, we decided to take a healthy dollop of mac 'n cheese, let it cool, then wrap in bacon for the bakin' treatment.

The result
We figured, since bacon and cheese are almost universally well-paired, that this match would work well...and we were right. In fact, we highly recommend you try the matchup at home, and recommend bacon-baked, rather than fried, mac 'n cheese hunks be put on the menu of every bar and grill in this great land of ours.

The recipe is simple: Whip up your favorite batch of mac 'n cheese, allow it to cool, spray a cookie sheet with nonstick and drop spoonfuls of the stuff onto the sheet, then allow to cool in the fridge for at least a couple hours. Then, take the hunks, wrap 'em in bacon, and bake until crisp and yummylooking.

Next up: Bacon + plantain chips