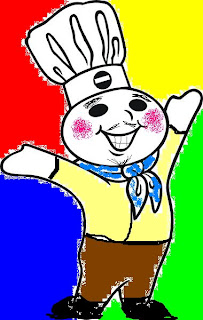 Baking bread is a giant pain in the tukis. Thank heavens that Pillsbury's engaged the services of a small naked white man to cut down on the labor involved. The brainchild of a copywriter from ad giant Leo Burnett, the Doughboy first popped fresh onto the scene in the 1960s, and he's been helping homemakers put piping hot starchy goods on their tables by meeting them halfway down the road to deliciousness ever since. Genius, isn't it, putting about-to-be-bread into a tube that you whack on a counter (ooh, we love that part) before baking in the oven, so that you can claim homemadedness without doing any real work?

Today, we salute you, DB, by wrapping one of your delicious, buttery crescent rolls up with bacon. We also honor you by putting some damned clothes on your pasty body (see pic). Seriously, who wears a toque and neckerchief, but no pants? You got problems, son.

The results
This test had a high probability of awesome from the outset. Sure enough, it rocked. We had been a little worried that the bacon touching the roll might be a wee bit soggy, but those concerns were unfounded--the bacon was chewy, the roll was flaky, and the two together were flat-out awesome. You, dear BDJ reader, should try this at home for your future bacon parties--the only thing that would increase the ass-kicking factor would be to wrap the crescent roll around a Lil' Smokie cocktail weenie, then ensconce in bacon, for the world's most delicious pig in a blanket.