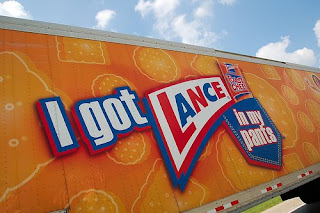 They bear an orange color not typically found in nature--understandable, because they hardly contain anything natural at all. Still, these cellophane-ensconced treats that travel in six-packs are among our favorite lunchtime treats. We still occasionally indulge in them when we encounter them in vending machines, at gas-station convenience marts, and at blood-donation centers, but we've never before bought them from a grocery store--until now (although the Lance Co.'s weird/funny campaign (see picture) might have us buying them more often).

Here, we took one of our Lance peanut butter/cheese crackers and wrapped it in bacon.

The results
Yummy, although the texture (bacon baking left not much crack in the cracker, just mush) left us cold. The cheese flavor was pretty much gone, leaving the peanut butter free to blossom and mingle with the bacon. If only the cracker had remained crisp instead of going completely limp, we might have considered this an eminently repeatable test--as it stands, we can only call this an edible semifailure. Dang.

Next up: Bacon + crescent roll
Posted by Spinner at 7:39 AM