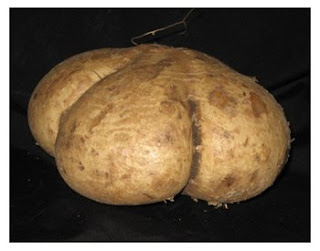 Parents, don't let your kids go as long as we did without discovering this crisp, versatile root vegetable. You can eat jicama raw or cooked, sweet or savory, by itself or with other ingredients. It might not be pretty--we think it looks like the result of a drunken roll in the hay between a turnip and a potato--but it's pretty damned tasty. Of course, we had to wrap it in bacon. You'll note that the jicama our procurement department looks, quite literally, butt ugly. Good job, Procurement!

The result
Yay! Bacon wrapped jicama FTW! By the way, a younger BDJ Labs associate had to explain that the "FTW" we keep seeing in texts, on Facebook, and on Twitter is lingo slung about by video-game enthusiasts--it means something is very, very good, and it stands for "for the win." Whatever. Bacon-wrapped jicama is good and definitely worth repeating for a bacon party--maybe sharing a platter with bacon-wrapped dates, so that you get a mix of crunchy and smushy textures next to each other.

Next up: We haven't decided ye--I mean, it's a surprise!