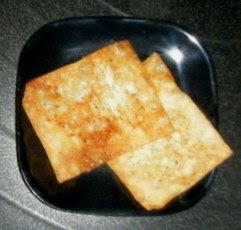 This just in: While preparing this week's delicious Bacon Bits recipe (bacon rangoon--stay tuned, it'll be up soon), we made an accidental yet completely brilliant discovery.

We used up all the rangoon filling and found ourselves with a stack of won ton wrappers left, so we fried those. We noticed that, perched upon the paper towels they were draining on, the golden-brown shingles looked...well, nekkid. We had a shaker of Bacon Salt nearby (as we always do), so we sprinkled the won tons liberally; when they cooled, we had a nibble. We knew they would taste good, but we didn't know they would taste this good--fantabulous, even. BDJ Labs associate Rebecca K., a vegetarian (we love her anyway), marveled at the taste and proclaimed the Bacon Salted won tons to be the closed damned thing she's ever had to actual bonafide crisp-cooked bacon (which is the one meat she misses, hence her love of Bacon Salt. We agree--and we think you will, too.

We almost hesitate to call this a recipe--it's so simple, trained monkeys could do it, even if they were drunk. But, in case you're a kitchen newbie, here are the ridiculously easy steps to make Won Ton Fakin' Strips

Directions:
Heat the oil over medium-high heat. Gently slide the won tons one by one and fry for about 30-45 seconds on each side, just until the edges turn brown. Flip and fry another 15-20 seconds. Remove and drain on a paper towel--don't pat the grease off 'cause they're delicate and will break. Sprinkle liberally (not conservatively) with Bacon Salt. Eat.