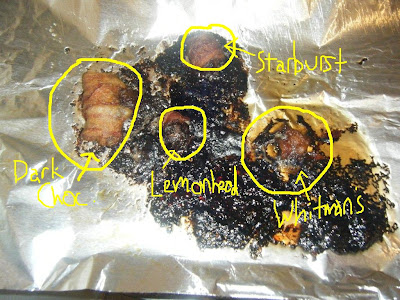 We've fired everyone in our baking department after this travesty--apparently they forgot to set a timer and couldn't be bothered to keep an eye on the oven. Witness the travesty at right--we were performing four baking tests in the interest of saving time and gas bill. That backfired bigtime when four days' worth of tests went up in smoke--LITERALLY--when chocolate leaked out and burned around the samples, and no baking staffer was there to rescue the samples from being burned to crisps. We're tearing up at the thought of all the bacon wasted in this horrendous accident--not to mention the Lemonhead, strawberry Starburst, Lindt 85% dark chocolate, and Whitman's coconut square that we'll never get back.

Sorry, folks--we're going to have to regroup and try again tomorrow. We promise we'll have at least five candylicious tests in by week's end.
Posted by Spinner at 12:50 PM