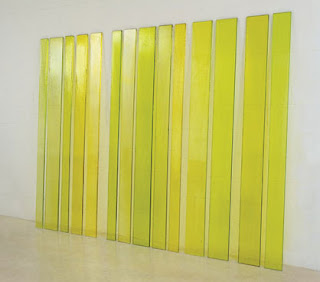 Jolly Ranchers started out an American original. The Western-named candies originated, not surprisingly, in the West; a Colorado couple sold the hard candies, along with ice cream and other confection in their Ranch Maid stores all over the Denver area. The candies proved to be the real gold mine, so they concentrated on those. The company changed hands a few times, ending up with the Hershey Co. Now, they're made in Canada. God bless America.

Today, kids all over the globe still love Jolly Ranchers--including artist Rebecca Holland, who used tons of melted green-apple Jollies to make the installation you see here (click for details). For this test, we decided to demonstrate our love for 'em, and to deviate from the wrapping method of bacon treatment. Instead, we crushed a bunch of watermelon Jolly Ranchers (our favorite) and sprinkled them on some strips for the last 5 minutes of baking.

The result
It's nice to end Dandy Candy Week on a high note. While we didn't get the dramatic visual we were hoping for (instead of looking all candy-coated and shiny, the strips just looked...pink), the flavor was a roaring success. The bacon cooked up crisp-chewy, and the candy--rather than setting up and returning to its previous hard-candy state--also took on a chewy consistency, so that the overall strip took on a watermelon/bacon taffy attitude. Yum, yum, yum. We're wishing we'd bought a bigger bag of Jollies, so we could repeat over and over again. Grape might not be super awesome, we suspect, but green apple would ROCK.

The conclusion: Bacon + watermelon Jolly Ranchers = oh, my God, run to the store right now and buy some bacon and a bag of Jolly Ranchers so you can do this IMMEDIATELY--we're not kidding

Next up: a delicious bacon recipe