While none of the current BDJ Labs staffers have bacon-themed skin art, these super-awesome tattoos have us thinking maybe it's time to make an appointment with our friendly neighborhood inkslingers to rectify that situation.

This one's from a gentleman who calls himself "Angry Tim" on his MySpace profile. We love the traditional, "Sailor Jerry"-like feel of the bacon strips, the banner, and the font that "I [heart] BACON" is written in. However--and not to get all skin-art-critic on y'all--while we do, in fact "EAT MEAT" quite frequently, we can't help but think the text at the bottom of this tattoo is redundant and unnecessary, and the psycho-killer font of the pro-carnivorism sentiment clashes with the style of the rest of the tattoo. If we were to crib this tat for our own skin, we'd leave that off. 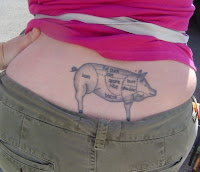 Generally, we're not a big fan of the tattoos women frequently get right above the waistline of their hip-hugging jeans (such tattoos are frequently referred to as "tramp stamps"). However, this "pig map" definitely gets our stamp of approval. In addition to having a lovely turn-of-the-century retro feel, the tattoo also has educational potential--if anyone ever asks you where bacon comes from, you can be more specific and accurate than simply stating that bacon is a miracle from Jesus. 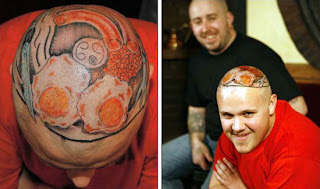 Finally, we admit that we have bacon on our minds pretty much 24/7/365 (or 366, every four years). Still, we're not sure we'd take that bacon-on-the-brain concept as literally as this British gentleman did. One, there's too much other crap sharing the "stage" with our beloved bacon. Two, while we're all for artistic expression, the tattoo artist got a little too jiggy with the style--the eggs look less fried than beaten up, for example, and the bacon doesn't look bacony enough. We think for now, we'll keep the bacon on our plates and in our stomachs, and off of our noggins.