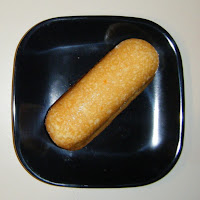 The subject
More chemical than edible, less sponge cake than actual sponge, the Twinkie has long been a staple of the American lunchbox. The hardy snack food has had its ups and downs--its original banana-creme filling had to be altered to boring old vanilla after World War II brought about a global banana shortage. In 1978, San Francisco supervisor Dan White fatally shot colleague Harvey Milk and mayor George Moscone, then blamed the poor, innocent Twinkie for his murderous madness.

Still, despite all its travails, the Twinkie survives (not surprising, since it contains enough chemicals to last through a nuclear holocaust)--and next year, the Twinkie will celebrate its 70th anniversary. As an early honor to its upcoming milestone, we decided to unite the Twinkie with bacon. 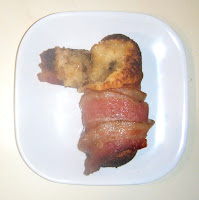 The results
The staff at BDJ Labs had high hopes for the Twinkie-bacon merger; after all, the combination brings together two of America's favorite artery-clogging treats. We replaced a single Twinkie's plastic wrapper with two tantalizing strips of Oscar Mayer bacon, then popped the cake into the oven, anticipating nothing less than a bacon-snack marriage made in fat-filled heaven.

Unfortunately, what we removed from the oven resembled less a delicious baked treat and more something you'd see if you were first to arrive at a crime scene. The heated creme filling had caused the top of the Twinkie to rupture, flinging the end of the bacon to the side. Both ends of the Twinkie burned to a crisp; when we sniffed the blackened Twinkie butts, we discovered they smelled strangely like singed carpet. The explosion of creme filling is absent from the photo above, because after we removed the snack-cake abomination from the oven, the creme foam covering the concoction mysteriously disappeared, like Jack the Ripper slipping into the London fog after dispatching a prostitute.

The taste of the Twinkie-bacon pairing is something we'd rather forget--and we will, after telling you that we feel like we need to go to the grocery store meat aisle and apologize to all of the bacon laying there, to repent for what we did to their Oscar Mayer brethren in this test. The already sickening sweetness of the Twinkie had been magnified a thousandfold by the exploded creme seeping into the cake, overpowering the bacon flavor into near oblivion. The black ends also tasted like burned carpet. After one scientific bite of the disasterous experiment, the test plates were handed to the lab assistants for disposal, and test staff cleansed their traumatized palates with (what else) strips of unadulterated bacon.