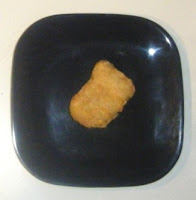 The subject
The McNugget celebrated its 25-year anniversary last year. Not much has changed since its debut--although several years back, McDonald's started touting their all-white-meat construction, they taste exactly the same to us. We love the taste, we love the sauces (especially sweet 'n sour), and we love McDonald's half-assed attempt to fake hand-craftedness by varying the shape. There's only three: The Boot (at left--look at it upside down), The Circle (round, sometimes egg-shaped), and The Tombstone.

Note to McDonald's: Remember when you had the cranberry and apple-spice sauces around the holiday? Please bring those back--they were awesome. Not as awesome as puttin' them in bacon, though--but we're getting ahead of ourselves... 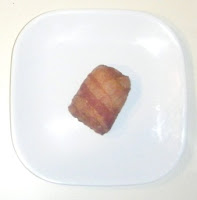 The result
Simple and delicious. We wouldn't make a regular habit out of bacon-wrapping our Nuggets (they already have 3g of fat in each--adding bacon is like throwing Everclear on an open flame), but as a special treat or maybe a party appetizer, they're perfect. We even dipped ours in our beloved sweet 'n sour sauce and loved them, although we suspect they might be even better in our second-favorite sauce (hot mustard). Thumbs up on this one.