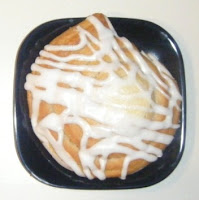 The subject
It might be named for Denmark, but the origin of this sweet, flaky pastry also has Austrian roots. In the 1850s, a bakery strike forced bakers in Denmark to hire foreign workers, including a glut of doughslingers from Austria. In their pastry arsenal was the plundergeback, a butter-based, croissant-like dough with filling in the middle. The Danish, being the fat-loving people they are, aded more egg and made it their own. When a Danish master baker made a batch o' these babies for Woodrow Wilson's wedding in 1915, their popularity spread, and the name of the baker's home country spread with it.

Personally, we at BDJ Labs find the danish generally far superior to plain old american "donuts"--and Entenmann's danish are far superior to anyone else's. Click here to watch their awesome site animation of floating danish, cookies, muffins, and other goodies, which you can spear with a fork. Mmm...

Wait, where were we? Oh, right--danish. We wrapped one in a bunch of bacon--let's see what happened... 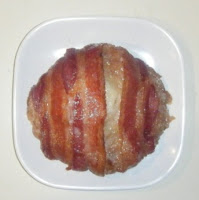 The result
Well, the finished test subject certainly looks pretty--witness the perfectly cooked bacon wrap, with a swatch of pastry goodness peeking through a gap in the strips. However, the baked bacon-wrapped danish ended up, if we may indulge in the technical parlance we frequently use at BDJ Labs, icky. The bacon grease soaked into the danish, which was already pretty fat-laden (a pretty small pastry contained a full 16g), and turned it into a soggy mess. Further, as often is the case with sweet subjects, the sweetness amplified to a level at which even Willie Wonka would wince, and then probably call on the Oompah Loompahs to take it away. We consumed only part of the sample, and decided this test was one we couldn't recommend.

The conclusion: Bacon + cheese danish = too much of too many good things

Saturday: Bacon and Doritos
Sunday: This week's Bacon Bit
Posted by Spinner at 6:29 AM