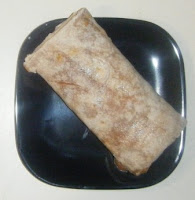 The subject
Frozen, microwaveable burritos are a foodstaple well-known to two groups of people: college students with limited money to spend on groceries (mostly because they've blown their dough on beer), and stoners too far gone to have any discriminating taste buds left. They have little in common with the fresh flavor of the burrito one could pick up made to order from their local taqueria, which is filled with fresh veggies, non-freezer-burned meat, and condiments like lettuce.

However, once you're out of college and sober enough to know better, you still might munch on one of these monotonal Mexican foodstuffs--more out of nostalgia, than hunger. Biting into one takes you back to the days when you were thinner, poorer, and dumber. We decided to take a trip back to our early 20s by engaging a humble frozen burrito in a BDJ test, figuring the flat flavor of the cheddar-bean burrito could only be improved by a bacon christening. 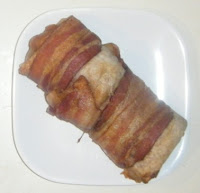 The result
Much as we expected, the bacon made the ghetto-licious frozen burrito better. The bacon flavor seeped into the thick tortilla, transforming it from a bland, mushy wrap with the consistency of wallpaper paste, to a crunchy, crispy bacon-flavored shell of deliciousness. Unfortunately, the goopy, beany innards of the burrito weren't permeated by bacony flavor; however, we concluded that if this bacon-rito were accompanied by salsa or some other flavorful dip (maybe guacamole made from the bacon-wrapped avocado from a previous test), it would be more than edible.

Wednesday afternoon: Bacon and brussel sprout
Thursday: Bacon and maraschino cherries
Posted by Spinner at 7:31 AM