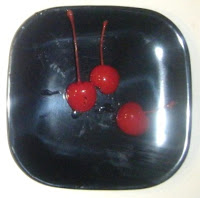 The subject
Most often found in cocktails, atop ice-cream sundaes, and decorating Easter hams, maraschino cherries are a garnish made in the good ol' US of A. The flavored fruits--named for the liqueur they were originally soaked in--were introduced in the U.S. in the late 19th century; a non-booze version (close to the chemical-laden version we know and love) emerged soon after. The advent of Prohibition caused the booze-soaked variety to lag far behind the artificially colored and flavored, booze-free kind.

Personally, BDJ Labs staffers like to eat these tasty treats right out of the jar--and they MUST have the stems intact, so we can do that knot-tying trick with our tongues. They're a perfect snack, and we thought that by wrapping them with bacon, they could only become...perfecter. 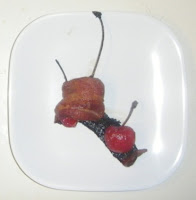 The result
We really need to improve our bacon-wrapping skills. I mean, look at that travesty to the right. We thought we had the three cherries wrapped snugly (if awkwardly), but during baking, one tried to escape out the side and ended getting all dried out, and the bacon underneath it burned black. Yuck.

It's good that we wrapped three cherries--the two non-blackened fruits were fantastic. They kept their moistness while taking on scores of bacon flavor molecules, attaining a near-perfect balance of sweet and salty. Yum.