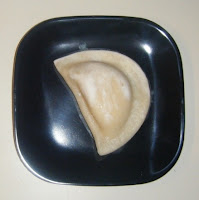 The subject
If you're from Chicago, as all BDJ staffers are, you're well familiar with the humble pierogi. The starchy nosh is Poland's answer to the ravioli--a semi-circle of pasta, filled with any one of a range of tasty edibles. We've had strawberry, prune, pork, sauerkraut, potato, onion, cheese (both savory and sweet), mushroom, and scores of other flavors. If we had to pick a favorite, we couldn't--although our favorite place to munch down on these is Podhalanka, an unassuming joint that feels more like your grandma's kitchen than a restaurant.

Every year, the tasty treat is celebrated in Whiting, Ind., at the wondrous Pierogi Fest--pierogi slingers from all over the Midwest (including several from Sweet Home Chicago) trek to hawk their wares. Bacon bits are among one of the common condiments laid alongside an order of pierogis for co-munching (other sides include applesauce and sour cream)--however, we've never seen a pierogi get the full-on pierogi treatment it deserves. We took a single store-bought potato-cheddar pierogi, wrapped it in a strip of bacon, and baked it for a few minutes. 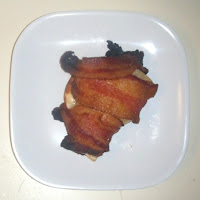 The results
We were confident in the potential deliciousness of this test subject--and we were not disappointed. The pierogi came out piping hot, and the chewy/crisp texture of the bacon proved a nice counternote to the pillowy softness of the potato filling. We wish we'd been able to procure fresh pierogi from our beloved Podhalanka, but the distance between our labs and the restaurant would be too much for a pierogi to travel and still maintain its full awesomeness. In any event, the Mrs. T's pierogis available in your grocer's freezer case are servicable, and the bacon perks them up nicely.

Saturday: Bacon and apple
Sunday: This week's Bacon Bit
Posted by Spinner at 7:34 AM