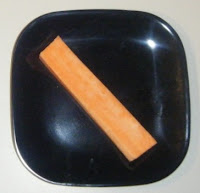 The subject
Sweet potatoes are the bastard child at the Thanksgiving table. They're always there--usually the canned variety, mashed into total submission and coated with marshmallows, of all things--but we're not sure anyone ever eats the damned things. None of the BDJ Labs staff ever did, so we grew up thinking we didn't like sweet potatoes. That is, until one glorious day, someone put before us a sweet potato that had been freshly baked, given the same respectful treatment as its white cousin, and we were forever changed. Since then, we've forsaken the syrupy canned variety, instead choosing the straight-from-the-produce-section kind. They're great baked, mashed, fried, and in potato salad.

One way we haven't had fresh sweet potato (until now, that is) is ensconced in glorious bacon. 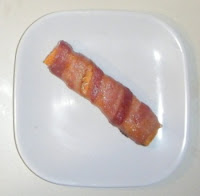 The result
Since sweet potatoes generally take longer to bake than the plain ol' pasty kind of 'taters, we were worried that even though we only baked a small plank of sweet potato, it would remain undercooked, while the bacon became black and (horrors!) inedible. Turns out, our worries were in vain--the sweet potato turned out perfectly, as did the bacon around it, and the two were well paired. Every morsel of the sample danced its way down our gullets, and each of us swore that next Thanksgiving, we'd lobby to get the marshmallow-swamped sweet potatoes swapped for fresh sweet potatoes topped with bacon instead.