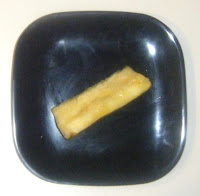 The subject
Fresh pineapple is just flat-out awesome. While we think the canned version is fine and tasty in its own right, the difference between the tin-encased stuff and the straight-from-the-produce section variety is like the distance between an apple right from the tree, and apple Jolly Ranchers. Fresh pineapple has substance, attitude, and this marvelous tango of acid tartness and (if it's in season) unbelievable sweetness.
When European explorers first encountered the fruit back in the 1600s, they called it "pineapple" for its resemblance to a pine cone, but we think it looks more like a hand grenade (well, we think so, anyway). And explosive as the flavor is, we thought maybe it could get even more of a bang if we were to add (what else?) bacon. Rather than wrapping an entire pineapple in strips (that would just be silly), we took a two-inch section and blanketed that with a single strip of Nueske's finest. 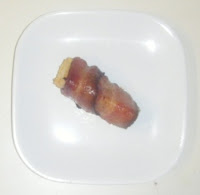 The results
The fruit was transformed somewhat after baking. The texture remained firm, more or less, but whereas baking amplifies the sweetness of many fruits (peaches, we're looking at you), in this case, the pineapple's sweetness dissipated significantly. What was left was a tart, almost vinegary quality. While the BDJ Labs staff consumed the entire sample in the testing process--hey, it was covered in bacon--we declared this result worth eating, but not worth repeating.
If we were to redo, we might actually go with canned pineapple--based on how it holds up when artfully arranged on top of a ham, it might fare better with ham's fairer cousin bacon than fresh pineapple did.
The conclusion: Bacon + pineapple = merely okay.
Friday: Bacon and garlic
Saturday: Bacon and cookie dough
Posted by Spinner at 6:31 AM