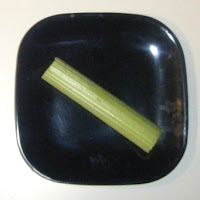 The subject
Celery's a solid, reliable member of the vegetable kingdom. It's great for snacking, fabulous on salads, awesome in stir fry, and fantastic in soups. As kids, many of us weren't too crazy about the stalks, but when some of us were wee little Brownies (pre-Girl Scouts), we were introduced to the marvelous snack Ants on a Log--a celery stalk with a dollop of peanut butter smeared in the crevice, then topped with raisins.

As grownups, we enjoy celery sans peanut butter (and ants), relishing the flavor, intense crunch, and side benefit of celery's flossing capabilities. But how would celery stand up to bacon baking? Let's find out... 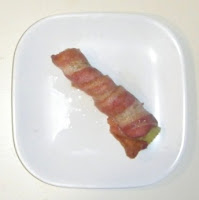 The result
In a word: EEEEEEW. The celery's flavor completely drained out--we have no earthly idea where it went--and it didn't take on any bacony goodness whatsoever as a result of the baking process. What remained inside the bacon wrap was a bland, limp, lifeless, stringy plank. While the celery meat turned soggy, the strings running throughout became tougher than nautical rope, and no set of choppers among the BDJ Labs staffers could gnaw through the test subjects. After declaring this test the biggest failure in BDJ history, we salvaged the bacon from the outside and threw the celery away.